Press enter to begin your search

Letting go of the adult aesthetic

It’s so easy to believe that I know what end-product a child is hoping for when they are creating and building. So easy for me to see a smoother path to their ideal design. So easy for me to take over and help them get there faster. So easy to direct and edit and guide so that, perhaps without them even realizing it, we have created an end-product that is pretty much what I think they were after, but probably a better version, at least according to me. So easy. It’s often faster too, and less messy, and more direct, and involves less “wasted” time and supplies.

During a forest school session on the schoolyard a couple of weeks ago, I unfurled a roll of burlap. A child asked what it was for. I shrugged, pointed to the other two rolls, and asked her what she though it might be for. She knew right away- building a tent, obviously. Could I please tie one end to a high branch. She would tie the other end to an extra roll then stretch them both to the fence 20 metres away. I thought “Hmm”. I thought “But if you want to make a tent the roll should be shorter and connected to something closer”. I thought “There’s going to be a lot of sag in the fabric and it won’t work as a tent”. I said “Okay”.

After the burlap was connected to the high branch it became a silent calling card to other children in the yard. The first to arrive asked what we were doing. “Building a tent” was the reply. “We should attach it the backstop” she said. A closer spot, a more tent-like spot to attach it, I thought. “No, we’re tying it to the fence” was the reply. Both children looked at me. I could have steered us toward the backstop tent. I could have suggested we try that first and made it so enticing that we just kept adding to that and we could have built a remarkably tent-like tent. I said “I’m hearing that you both want to build a tent. One of you wants to tie both pieces of burlap together and then tie it to the fence, and one of you wants to tie it to the backstop.” The first child says “Let’s tie it to the fence.” The second child says “And if that doesn’t work we’ll tie it to the backstop”. I say “Okay”, and we start tying.

The “tent” was a strip of burlap hanging over the ground. It, too, beckoned to other children.

The original creator asked if she could sit on it. I said “I don’t know, what do you think?”. She said she could. So she did. And so did many others. The tent became a hammock, and a ship. It became a ladder up to the high branch and a slide back down. It became a long, patient line of collaborators keeping each other safe while they climbed and slid at one end, and a cradle for rocking baby-children in at the other. 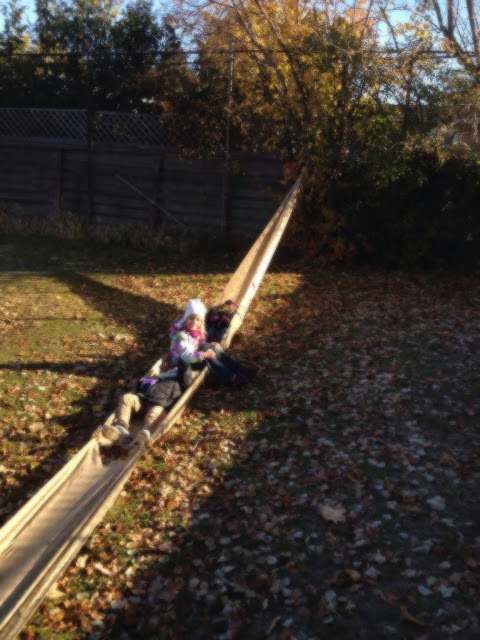 It became so much more than the tent that I imagined ever could have been if I had directed the play when it was first shown to me. 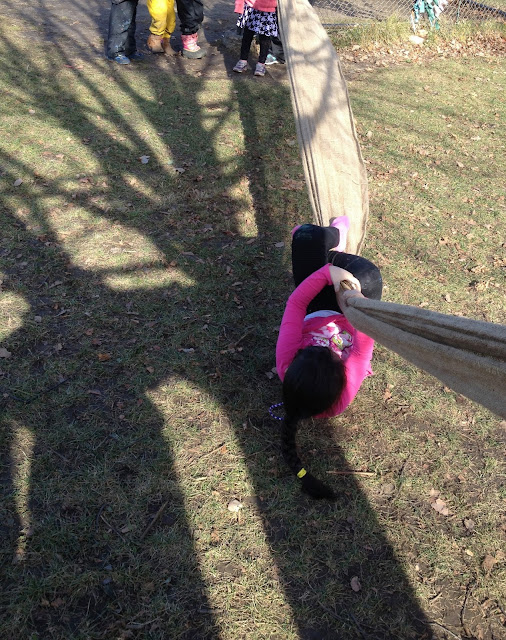 I’m so glad I kept my thoughts to myself and was there to see what emerged.

A logistics issue came up and we had to cut the play off well before the children were ready to move on. A few quickly and repeatedly reminded me that they planned to play on the “slide” again. I will show up and offer my height to help get the set-up the way they want it to be but I know right now that however I imagine the scenario will unfold there will definitely be unexpected, unanticipated, surprising, possibly difficult, absolutely marvellous play happening.

You can unsubscribe anytime